When a cold wind blows and begins to drop the dead leaves that cling to trees, the Salvation Army’s Christmas Kettle appears on the street corner.

The other day, I booked an annual Christmas cake.

One year is about to pass this year.

In “A Christmas Carol” by Charles Dickens (published in 1843), the fire of the candle also appears impressively in the scene where the ghost of an old man Marley, who was his former business partner and had died seven years before, visited Scrooge, the main character. It was an era when the Edison light bulb was not invented yet.

“The Chemical History of a Candle” 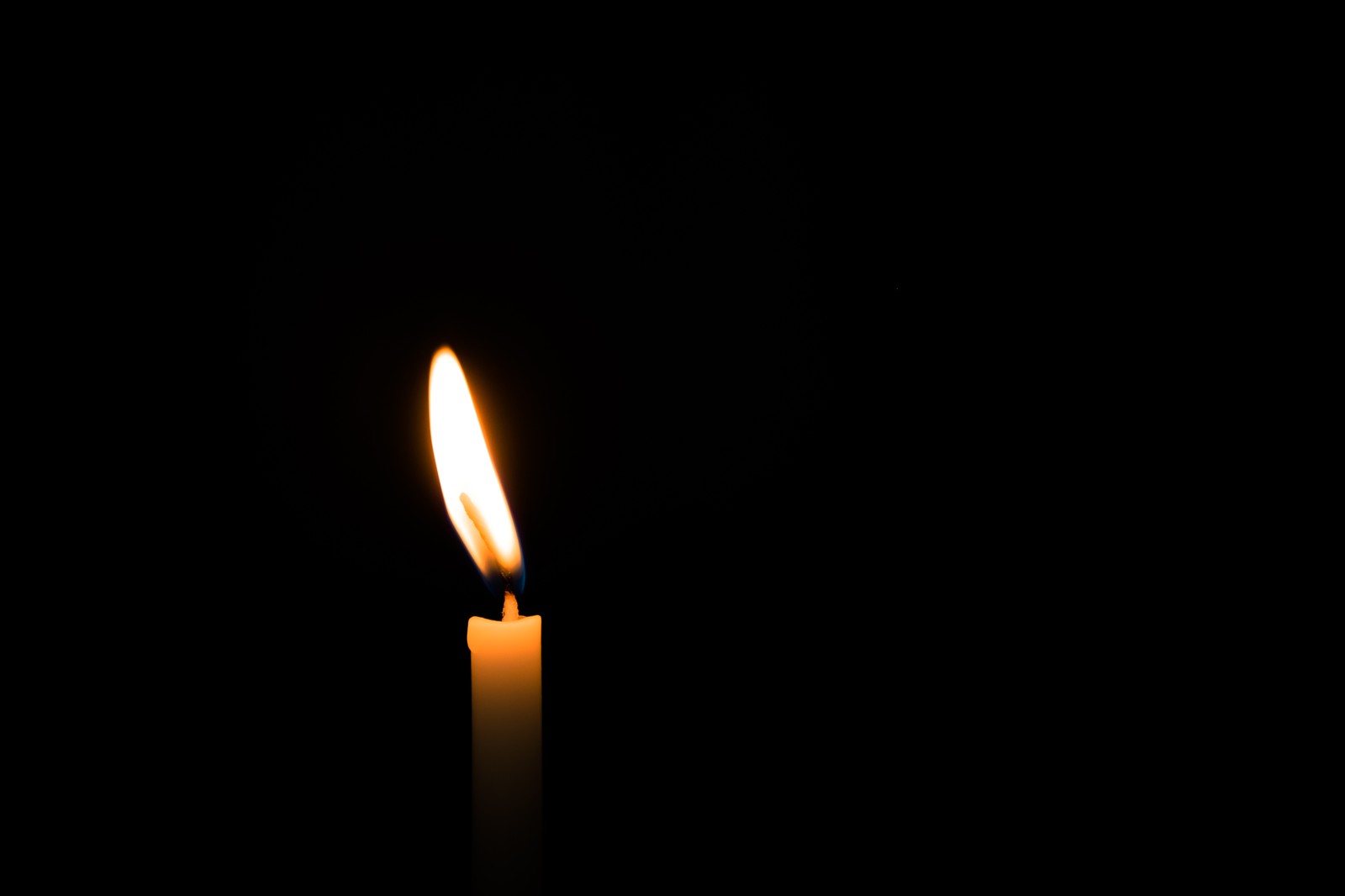 Candles were once made of animal and vegetable oils, honey, and paraffin from the swamps of Ireland. In modern times, they are made from oil.

In the lecture, Faraday mentioned in a little funny expression,

I have here also a substance brought from Japan since we have forced an entrance into that out-of-the-way place—a sort of wax which a kind friend has sent me, and which forms a new material for the manufacture of candles.” [Sankyo Note: Commodore Matthew Perry’s Black Ships]

You see, then, in the first instance, that a beautiful cup is formed. As the air comes to the candle, it moves upward by the force of the current which the heat of the candle produces, and it so cools all the sides of the wax, tallow, or fuel as to keep the edge much cooler than the part within; the part within melts by the flame that runs down the wick as far as it can go before it is extinguished, but the part on the outside does not melt. If I made a current in one direction, my cup would be lop-sided, and the fluid would consequently run over; for the same force of gravity which holds worlds together holds this fluid in a horizontal position, and if the cup be not horizontal, of course the fluid will run away in guttering. You see, therefore, that the cup is formed by this beautifully regular ascending current of air
playing upon all sides, which keeps the exterior of the candle cool. No fuel would serve for a candle which has not the property of giving this cup, except such fuel as the Irish bogwood, where the material itself is like a sponge and holds its own fuel.

Now the only reason why the candle does not burn all down the side of the wick is that the melted tallow extinguishes the flame.

Faraday was surprised at the Japanese candles.

A LADY who honors me by her presence at these lectures has conferred a still farther obligation by sending me these two candles, which are from japan, and, I presume, are made of that substance to which I referred in a former lecture. You see that they are even far more highly ornamented than the French candles, and, I suppose, are candles of luxury, judging from their appearance. They have a remarkable peculiarity about them,—namely, a hollow wick,—that beautiful peculiarity which Argand introduced into the lamp and made so valuable. To those who receive such presents from the East, I may just say that this and such like materials gradually undergo a change which gives them on the surface a dull and dead appearance; but they may easily be restored to their original beauty if the surface be rubbed with a clean cloth or silk handkerchief, so as to polish the little rugosity or roughness: this will restore the beauty of the colors. I have so rubbed one of these candles, and you see the difference between it and the other which has not been polished, but which may be restored by the same process. Observe, also, that these moulded candles from Japan are made more conical than the moulded candles in this part of the world. 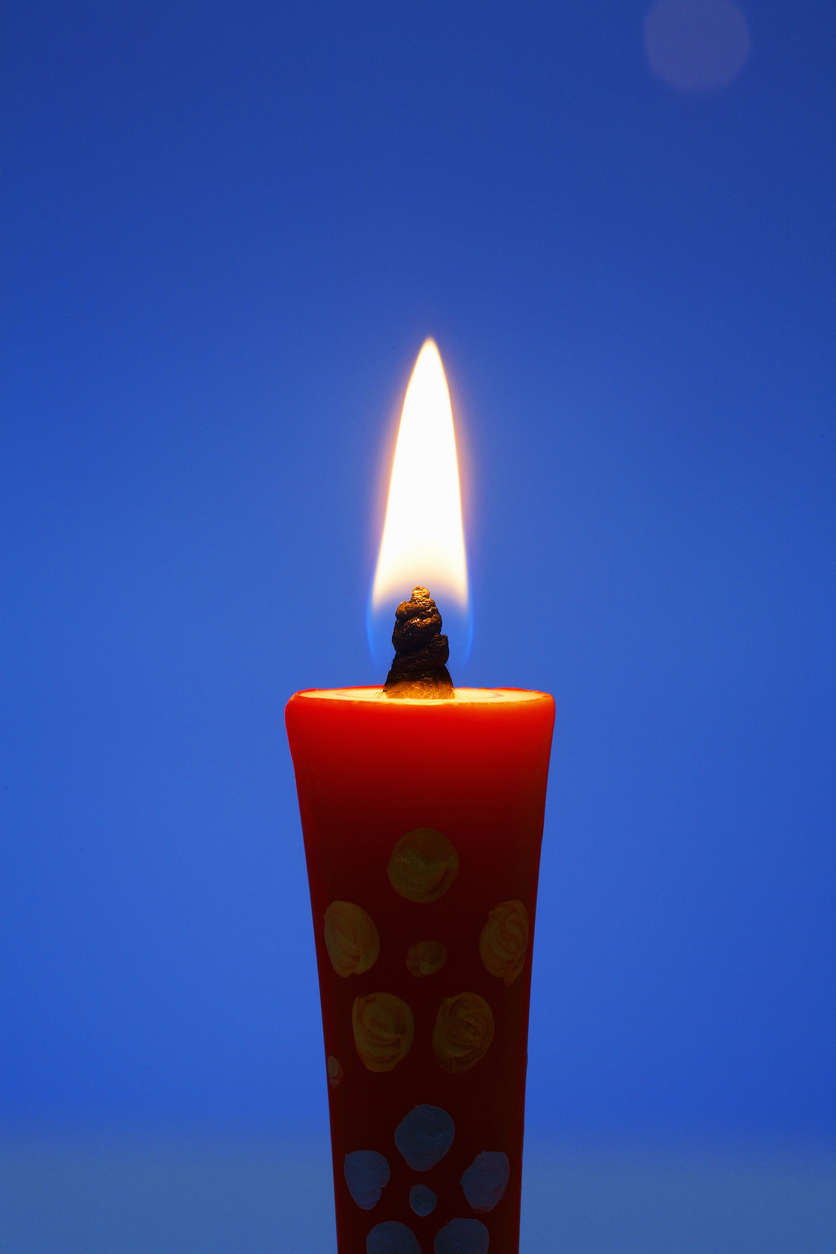 The core of this candle is much thicker than usual.

There is a hollow in the center of the wick, which contains air.

This hollow can be made by winding a wick from the medullary pulp around a bamboo stick with Japanese paper, solidifying the wax with a wooden mold, and then removing the bamboo stick.

In the case of this hollow core, air flows through the body of the candle and oxygen is supplied not only from the outside of the core but also from the inside.

The flow of oxygen causes the flame to fluctuate, so the flame of a Japanese candle becomes large and impressive.

This structure and material also creates the need for regular removal of the cinder from the wick.

However, even the Western candle has core cutting.

A candle wick trimmer is priced at $10 on Amazon.

There is a site described about the correct way to light a candle.

Each time you want to burn your candle, start by trimming the wick to between 1/8 and 1/4 inches long. You can use scissors, nail clippers (that’s my personal favorite), or a specialized wick trimmer, but no matter what you do, always trim.

However, this is the case with an aroma candle in a glass bottle.

This page says that incomplete combustion gas will stain the inside of the glass without trimming the wick.

And for candles with a diameter of 7.5-10 cm, the site advises not to buy single-core candles, because there is no energy to melt the wax unless it is a multi-core candle.

The core of our usual candle, which is made by a famous company with a Japanese place name, has a cotton thread, but it burns out at the heart of the flame without the need to cut it.

Ojiya Chijimi’s snow bleaching is sterilized and bleached by ozone generated by the reaction of ultraviolet rays with snow, however, “hakuro (white wax)”, also called “sarashiro (exposed wax)”, is exposed to sunlight for a month to destroy and bleach the pigment with the ultraviolet rays.

What Happens When You Light a Candle in Space? 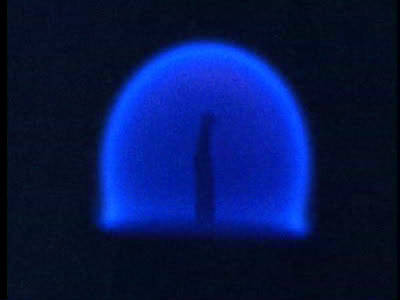 As an aside, I found an experimental result of what would happen if a candle was burned in space.

When a candle is lit in a weightless space (more precisely, a microgravity space) like the International Space Station, it looks like the picture on the right.

It’s a round blue flame.

The vertical line in the center is the core.

This experiment was carried out by NASA in 1996 at the space station Mir, which does not exist now, and the photo on the right is also taken by NASA.

The candle light on the ground is shown in the upper part of this article, but it looks like a vertically elongated, rounded triangle.

This is because an updraft occurs around the flame, providing oxygen from underneath the flame.

However, an updraft does not occur in the microgravity space. Therefore, it becomes a round flame.

At the same time, the amount of oxygen supplied is overwhelmingly larger with the help of the updraft, so the flame in the universe without updraft has a lower temperature than the flame on the ground and the color is dim blue.